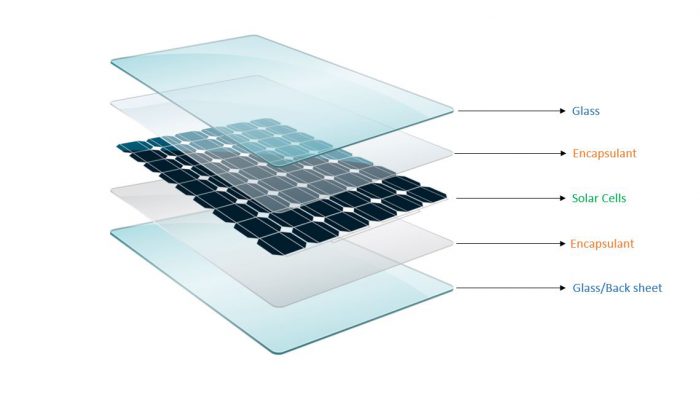 A Journey in Colorful Solar, Ep. 4 – The production of our solar panels

If you want to read the previous blog about how solar energy is transformed into electrical energy by solar cells, read episode 3!

Last week I explained in very simple terms how sunlight hitting solar cells results in an electrical circuit. Today, I will go further in explaining how solar panels are made in our production facility in Roosendaal.
I will describe every stage: the stringer, the lay-up station, IV and EL testing, lamination, and finishing. But first, let me tell you something more about our solar cells.

Solar cells: what they are made of

In brief, solar cells are made of a 100 µm (microns) thin crystalline silicon wafer which has several coating layers on both sides. The coating protects the silicon wafer, a fragile semiconductive material, from external agents, it reduces its reflective property and enhances its overall conductivity. Our CTO Büşra Yilmaz pointed out that we only use monocrystalline solar cells. Electrons travel along with the cell through the busbars, the conductive silver ribbons on the cells, making it possible for the energy captured by every cell to form a bigger circuit. Considering that every cell produces up to 0.6 V (volts) of energy, it makes sense to connect several of them in a series to get a higher power potential. Let’s see how that happens in the tabber-stringer machine.

The tabber-stringer: soldering busbars and cells to form an interconnected series of cells

Two baskets containing the solar cells are loaded upfront, and a vacuum clamp picks up cells from one of these baskets and places them on the red area, above which there is a camera making a quality check.  If there are problems with the quality of the cell, e.g. incorrect shape or cracks, they are placed in the wastebasket, otherwise, they are brought forward to the buffer area that is the white platform in the middle. This cell is then placed onto the green conveyor belt on the other side.

Next, the silver ribbons called busbars are grabbed by a clamp system and pulled over the cell. So, the clamps pull the silver ribbons over the solar cell. This solar cell with the ribbon moves further down the conveyor belt, and the subsequent cell is placed on top of the ribbons, which stick out from the previous cell. So, the busbars start on top of the cell, which is the negative side of it, and after they go on the back side of the next cell, which is the positive side. The connection between the plus and minus of two different cells makes it possible to get a circuit.

The resulting column of cells is not connected by anything, it consists of loose busbars woven between cells, so they need to go to the step in the process, which is the soldering head. Here, some little pins use light and heat to solder busbars and cells together on both sides.

The entire string, which is a column of up to 12 interconnected cells, exits on the blue transporter belt and the ABB robot picks them from the belt and places them in a basket. The columns of cells are then ready to be quality-tested for quality at the EL- and IV-testing stations, which I will write more about in a separate episode. Once the quality of the strings of cells has been tested, they are taken to the lay-up station.

The front carrier, which is usually glass, is first placed on the workstation. The encapsulant foil(s) are placed on top of the glass. This foil will melt and will end up acting as a glue later, in the lamination process, holding every layer together. Then we come to the layer where the strings of solar cells are placed and connected to each other by soldering a conductive ribbon that forms the circuit on the solar panel. The circuit leads to a central location on one end of the panel, where the ribbon terminals are connected to an external junction box.

Finally, another encapsulant foil and the back carrier are placed onto the panel, the latter being either glass, like on the front, or a back sheet. Both the rear materials have an incision to let the junction box come out. Once all the layers are ready, they are taped together on the sides to make sure they don’t slide during the lamination. The result is a single lay-up, a “package” that is ready to into the laminator.

The laminator: pressure, vacuum, and heat turn the lay-up into a solar panel

When you are baking a certain cake, you need the right recipe. If the components or the cooking time change, then you will bake a different cake. Here comes the challenge; to find the balance in the laminator (our oven) and obtain the perfect solar panel. The goal is to have the recipe combine the right level of applied pressure, vacuum, and heat at different times according to the size, shape, and application of the panel. This will lead to attaining an adequate gel content in every part of the module, to let the encapsulants create a long-lasting adhesion. Lamination, where the encapsulants transform into gel-like glue, is an irreversible process, so it’s extremely important to ensure your ingredients and recipe are in order, otherwise, you’ll bake a bad cake! Of course, we are very protective of our recipes, like every experienced cook we keep them a secret.

Now, think of the panel as a toastie instead: the layers between the two slices of bread (front and back carrier) with the cheese (encapsulants) melted in the toaster (the laminator). Can you picture the molten cheese dripping out of the sides? Now, maybe you would not cut that melted cheese from the toastie (I wouldn’t!), but you do need to trim the edges of the solar panel after lamination. What surprised me, is that the tape that holds the panel together before lamination does not melt during the lamination process, so you also need to remove that on the sides. During the trimming, the panel undergoes its first, up-close visual inspection to detect any lamination defects.

After the trimming has been done, the junction box can be stuck to the primed surface using special adhesive tapes and connected to the terminals. After a further session of IV- and EL-testing, the panel is ready! Finally, every solar panel is placed on a rack for a second visual inspection, from a distance of 5 meters. If the panel is visually acceptable (or just awesome in most of the cases), it gets cleaned and packaged, ready to be shipped to our happy clients.

I can’t wait to tell you what I am learning about the innovative technologies we use to produce our colored solar panels!

Enjoy this YouTube video that shows our production process: