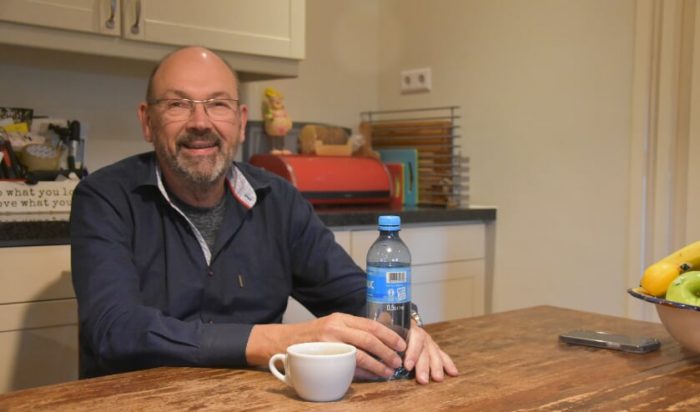 Guust Verpaalen: ‘Our strategy is to ensure a full pipeline’

ROOSENDAAL – Kameleon Solar is a Roosendaal-based company that specializes in colored solar panels. Guust Verpaalen became a shareholder of the company in 2015, together with two others, but at that time he actually had no clue about the world of solar panels. “After the first year, I thought, We’re betting on the wrong horse,” he says.

Guust, you started solar panels in 2015, what did you do before that?

I did gymnasium, but after that I didn’t feel like continuing my studies. I then applied for a job with the tax authorities. There you could get started as an accountant through an internal course. It was a three-year internal course, I thought. But in addition you started an external course which lasted twelve years in the evening hours. I only found that out later. It was fun work. I got to check on companies and so I went everywhere. From a blacksmith to a restaurant to a factory. It went well, until one day my boss told me that there was a nice position for me at Philip Morris. I could work there as an internal auditor and that’s what I did.

Yes, it was. I grew into the position of general manager. I got to travel a lot for my job, I managed different countries and so on. I really saw everything of what can happen in such a big company and I really enjoyed working there. But after a while I wondered: Is this it? It began to gnaw at me to do something else again. In the past I wrote a book about change management. The world is changing so fast, and many people and companies are struggling to cope. I decided to stop working at Philip Morris and started working as a change coach. There I met someone who was in solar panels, but he got stuck. Among other things, he was looking for a financer. I found one for him, but he wanted me to run the company.

Yes, after some hesitation. It’s the only thing I hadn’t done yet: build a start-up myself. Besides, I liked the fact that it was about solar panels. I had previously worked for the tax authorities and Philip Morris (cigarettes), you don’t make yourself popular with them. But everyone is enthusiastic about solar panels.

How have those first few years been?

So in 2015 I started with no clue about the world of solar panels. After one year we said goodbye to the founder and then we continued with two shareholders. At the same time, we came to the conclusion that we were betting on the wrong horse. So in 2017 we really started doing what we are doing now: Supplying colored solar panels. We started by working with colored glass from the Emirates, but that didn’t work. The quality there was not yet up to par. In addition, we were working with colored solar cells. Eventually, we developed our own color product, ColorBlast, and we presented it in 2017 during Dutch Design Week. In 2018 we had our first project and now we can make solar panels in about a thousand different colors.

Did you underestimate it?

I knew it wouldn’t be an instant success, but you really have to have unbridled optimism. You have to deal with setbacks. There are days when you think, “Shit, what do we do now?” and the next day you have to get back up and move on. What I underestimated the most were the lead times. We focus primarily on renovation and new construction in the commercial market. That is a market for the long haul. Sometimes people are very enthusiastic and then you don’t hear anything for four months. Do they finally take the plunge? Then it can sometimes take a year before the project actually starts and even then the cooperation can break down along the way.

How do you deal with that?

Our strategy is to ensure a full pipeline of potential projects. If one or two are dropped, that’s not a problem because there are other projects ready to go. If the pipeline is full enough, things will work out fine. We don’t just work in the Netherlands, we work all over the world. We are working on projects in Israel, Scandinavia, Italy and Switzerland. We also notice that time is very much on our side. The standards for sustainability are rising. We see a change. We are on the verge of scaling up our company, but the moment to hire staff always comes at the wrong time. You’ve just hired people and then production comes to a standstill again or you’re just too late in hiring people.

Where do you see your company in five years?

We’ll still be in Roosendaal, but maybe we’ll have other branches. We will continue to develop, because we have to keep up. Ultimately we have one goal and that is to be the color expert in the field of solar panels. Building up brand awareness is the hardest thing for a start-up. We have done several projects now, so you don’t have to prove yourself as much. It would be nice if in five years’ time we had done a project in many countries, so that people know that they should come to us for coloured solar panels. And of course there will be competitors, but the market is so big that I don’t see myself fighting with competitors. There are still so many square meters that can be covered with solar panels. Still, it remains to be seen whether we will still exist in five years. We see the light, but we’re not there yet. We don’t yet have a stream of projects that put us in a safe haven, but things are getting better and better.

Final question: who would you like to sit at the kitchen table with?

I would prefer to sit at the kitchen table with my supporter, Vicky Giltjes. She is also an entrepreneur who has reinvented herself with her vegetable garden store “At Vicky”. Fortunately, we can do that every day.

Read the original article on Internetbode.