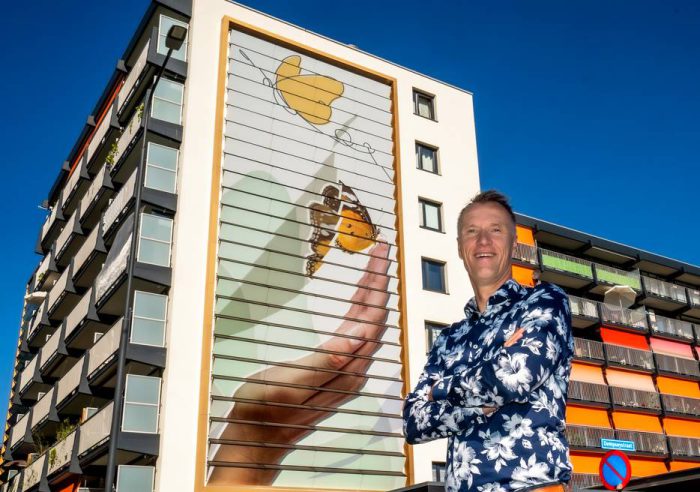 Are solar panels ugly? On the contrary, they are colorful or decorative

ROOSENDAAL/EINDHOVEN – Solar panels are not known for being aesthetic gems. Especially in high-rise buildings, this can be a problem. Two companies from Brabant show how you can still fully enjoy solar energy without violating the building.

The dark-colored solar panels have evoked critical reactions on more than one occasion, and that’s not going to change anytime soon. Especially in high-rise buildings, this is a reason for some owners to forgo this source of renewable energy.

A flat with dozens of apartments or several offices often has a roof that does not have the space for panels to power the entire building. There are installations on top, or the surface is simply too small.

Façade as an alternative

An alternative is the façade. But to cover this with dark panels that can be seen for miles around leads to little enthusiasm. However, there are certainly opportunities for the future when it comes to bringing in solar energy, as calculated by the research organization TNO: in the Netherlands, there are some 1600 square kilometers of façade surface available. A gigantic sustainable potential.

In the past ten years, a number of companies have responded to this with innovative concepts to benefit from solar energy and put something beautiful on the wall. In Brabant, for example, there is Kameleon Solar in Roosendaal and ZigZagSolar in Eindhoven.

“When people say to us: we want terracotta, we ask: what color?“

The two have different approaches. The Roosendalers started making color panels for energy façades in 2016. “We wanted to help owners of high-rise buildings with façades that are beautiful and produce energy. We now have a color library with about four thousand possibilities. If people say to us: we want terracotta, then we ask: what color? We have dozens of options for terracotta alone,” says Guust Verpaalen, the owner of Kameleon Solar.

The company can make solar panels in special colors or patterns, but also let them form one image. For example, a picture of Michiel de Ruyter, as the Roosendalers did for Rijkswaterstaat. “We can also have the solar panels match the color of the building. For example, an owner near Oslo wanted to make his building more sustainable. However, his building has a protected status and so the panels were only an option if they were the same color as the original façade elements from 1961. We managed that, with a combination of solar panels and insulated glass.”

The print is on the outside

Kameleon has unique software that allows them to see if a certain color combination or image is possible and what the end result will look like. Then they order the glass from the supplier. In Roosendaal, they assemble the solar panel. “The image or pattern becomes visible on the black background of the panel. The print is on the outside.”

The sun finds its way through the holes in the print. “That’s where the light can shine through on the cells.” Those holes are not seen by the outside world. The special glass prevents unwanted mirror effects. The panels are laminated together and then attached to the façade. This way, they integrate into the building instead of sticking out through a frame.

“We are not dealing with a single peak moment: the sun revolves around the façades throughout the day“

Of course, it does provide less solar energy than the regular panels on the roof. “We coordinate this with the customer and can calculate the yield in advance, per color. Does someone not want a surplus of electricity, but just enough kilowatt hours to charge the car fleet? Then we will take care of that. The placement of the panels on the façade can also play a role in this.”

According to Verpaalen, their technology also does not create grid congestion. “Because we are not dealing with one peak moment: the sun rotates around the façades during the day.”

The panels are pricey, but with today’s electricity prices, they still pay for themselves quickly, says Verpaalen. Kameleon Solar panels are now installed from Helmond to Gävle in Sweden. There is also a lot of interest from America and Great Britain.

In addition, the people of Roosendaal are working with Rijkswaterstaat on a pilot project to make solar meadows more attractive. ”So you won’t soon be driving through a landscape full of dark panels. We made the one of Michiel de Ruyter for this purpose.”

Eindhoven-based ZigZagSolar also offers solar panels for façades of high-rise buildings, while the outside world doesn’t notice a thing. A passerby sees an image or a colored façade, with the top of each cassette sticking out. At an angle of inclination, so that the water can drain away. This is the decorative panel. At the top of the cassette are the solar panels. They face the sun, and the sunlight is reflected by the decorative front of the solar panels.

“The solar panels are only visible to birds or if you are standing on the balcony,” says Frank Bartelen of the Eindhoven-based company. He talks about more than 100 kilowatt hours of solar energy per square meter per year and roughly an average price of 100 euros per square meter extra, compared to a façade without solar panels.

Not tripping over solar meadows and cables

ZigZagSolar has customers primarily in the Netherlands and India, where there are many high-rise buildings. “They can choose one color or an image”. Any material is possible for the decorative panel. “At the back of the panel, our technicians make the insulation, so that you have a complete façade. Which also pays for itself.”

For example, in Sittard last year a façade was decorated with street art, which was chosen by the residents. ZigZagSolar installed a total of two hundred narrow solar panels there, which together generated 16,000 kilowatt hours.

Bartelen thinks it is important to generate solar energy where it is also used. “So that we don’t stumble across solar meadows and cables all over the Netherlands.”