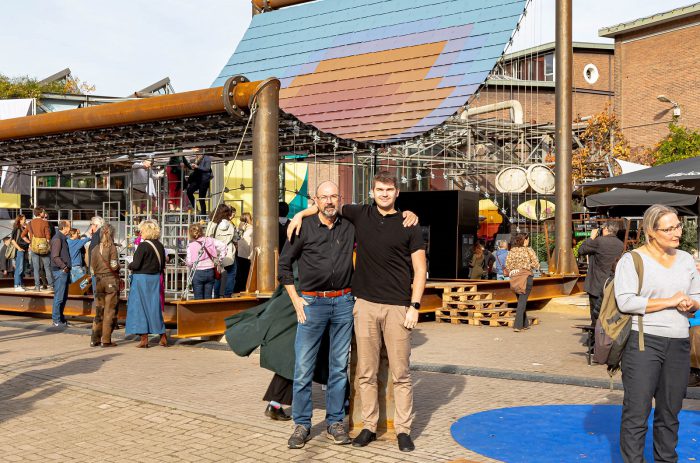 After 7 years as CEO of Kameleon Solar, Guust Verpaalen will soon pass the torch to Kevin Verpaalen, who will lead the company into its next phase.

Kameleon Solar was founded in 2015 with a focus on custom-made, flexible PV modules. After its first year, the company re-defined its strategy to focus on colored BIPV applications, primarily solar façades. The company’s flagship product ColorBlast® was developed in-house by Kevin and his colleague Chiraag Reddy and was successfully introduced in 2017. In the meantime, Kameleon Solar has set up strategic partnerships in most European countries and internationally, as well.

Before Kameleon Solar, Guust spent 22 years of his career at Philip Morris International, responsible for production, marketing, sales, and corporate affairs, to name but a few of his roles. In 2007, Guust left the tobacco industry and started his own consulting practice. In the region of West-Brabant, he was a supervisory board member of several institutes, including Curio, Stadlander, Green Chemistry Campus, and more. He also became a member of the Economic Board of West-Brabant. In 2015, the opportunity arose to become part of a sustainable start-up, now Kameleon Solar, and Guust jumped at the occasion. “During my career, I had never been exposed to a truly entrepreneurial start-up, and Kameleon Solar offered this opportunity with a beautiful and sustainable product,” Guust explains. “I was and am still convinced that the climate crisis is one of the biggest challenges humanity faces. Providing a product that can be beautifully integrated into the built environment seemed to me a wonderful way to contribute to solving this problem we all face.”

After 7 years at the helm, Guust has decided to pass his responsibilities on to his son Kevin, who has been with Kameleon Solar since its conception. “The company has matured and is in a transition period where more structure and focus on scaling up is needed. This step requires a different way of thinking and fresh leadership, and I feel that Kevin and the young team he has put together are the perfect candidates for the job,” says Guust. “Kevin manages an impressive balance between technical knowledge, creativity, and strategic thinking; I have no doubt he will lead this company to further success, as he has already done in the past.” Guust will stay on at Kameleon Solar in an advisory role in the background, focusing on utilizing his network to form further partnerships for the company. “It’s been a rewarding experience to work alongside Guust these past 7 years,” Kevin states; “even though we are different in many regards, I feel we complement one another’s strengths and weaknesses.”

Kevin began his work at the start of Kameleon Solar after university, primarily performing marketing and translation tasks, but he quickly grew to take on more responsibilities. From graphic design to marketing strategy, to product development and sales, he became increasingly involved with the company’s higher-level strategy and management. “Kevin is an excellent autodidact with a hunger to understand the larger systems at work, and he quickly masters those systems to broaden his perspective and also his goals,” Guust explains. As Creative Director, Kevin managed the marketing and sales strategy of Kameleon Solar whilst also working closely with CTO Büşra Yılmaz and Head of Engineering Chiraag Reddy on product development. “I have worked closely with Kevin in many areas of Kameleon Solar since I joined in 2020. His versatility and creative background enable him to oversee many aspects of the company, coordinating with different teams and making strategic decisions. The company vision and his own are closely aligned and give him a clear view on crucial action points and result in great outcomes because of it”, Büşra remarks.

Recently, Kevin has been focusing on communicating the opportunities of colored solar panels and the important role of solar façades and other building-integrated photovoltaics (BIPV) applications in the energy transition. He gives frequent workshops on the ‘ins and outs’ of custom and colored solar modules, such as his recent Solar Lab for the Solar Biennale, and often represents Kameleon Solar at events such as Sunday and the Dutch Design Week. Kevin also worked closely with Team VIRTUe on their entry for the Solar Decathlon 21/22, showing them the best ways to customize a PV module, which ended up winning them second place overall and first place for the Solar Award. As board member for the foundation BIPV Nederland, he organized the marketing communications group, helped set up a BIPV Award, and aided in their merger with branch organization Holland Solar.

As for the future of Kameleon Solar, it’s all about scaling up. Having recently formed a strategic sales partnership with Glass Partners Solutions for much of the European market, Kameleon Solar’s goal is to be able to commit its attention to fully equipping its new partner to deliver the same quality of BIPV services the company brings to the Dutch market. Kevin elaborates: “We are also discussing partnerships for the UK and USA, and revisiting some of the partnerships we have for other markets we currently serve.” Furthermore, the new CEO has plans to improve their pricing model, introduce a range of new and improved color technologies in the coming year, and some new applications for their products.

Both Guust and Kevin see their recent success at the Dutch Design Week as a sign of things to come. “The Solar Pavilion was a confirmation of our company vision; seeing thousands of people joyfully interacting with our product was incredibly rewarding,” Kevin points out. But this wasn’t their first project at the event, as Guust looks back: “In 2017, we released an early version of ColorBlast® at the Dutch Design Week, and here we are, five years later, with a mature product working with renowned parties such as V8 Architects and Marjan van Aubel Studio.” He continues: “This project shows a modern and better view of how the energy transition should take place and such a new vision should be ushered in by new leaders”.

On December 1, Kevin will take over the role of CEO at Kameleon Solar from Guust and keep on pursuing their shared vision of contributing to a world that is both more beautiful and more sustainable.